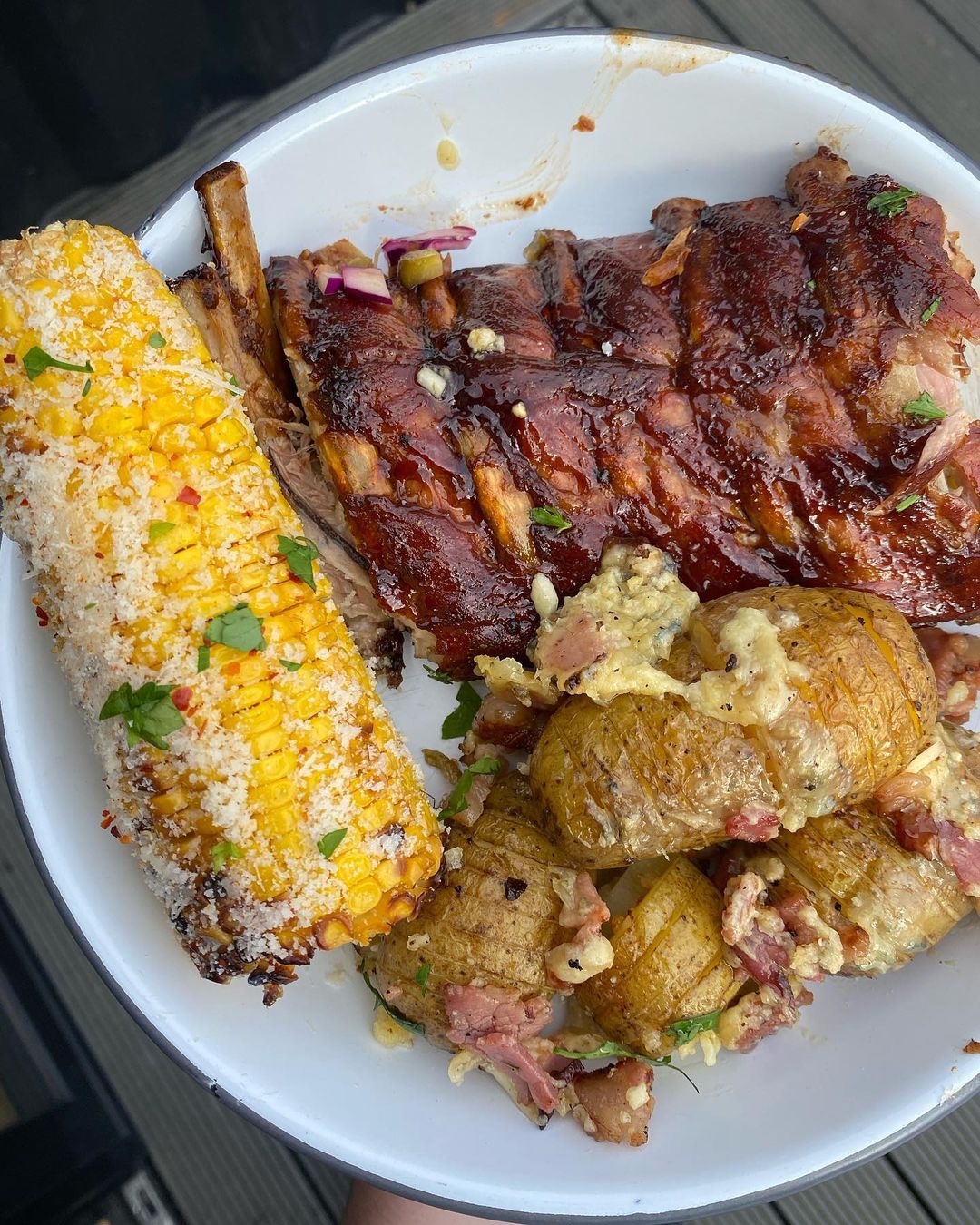 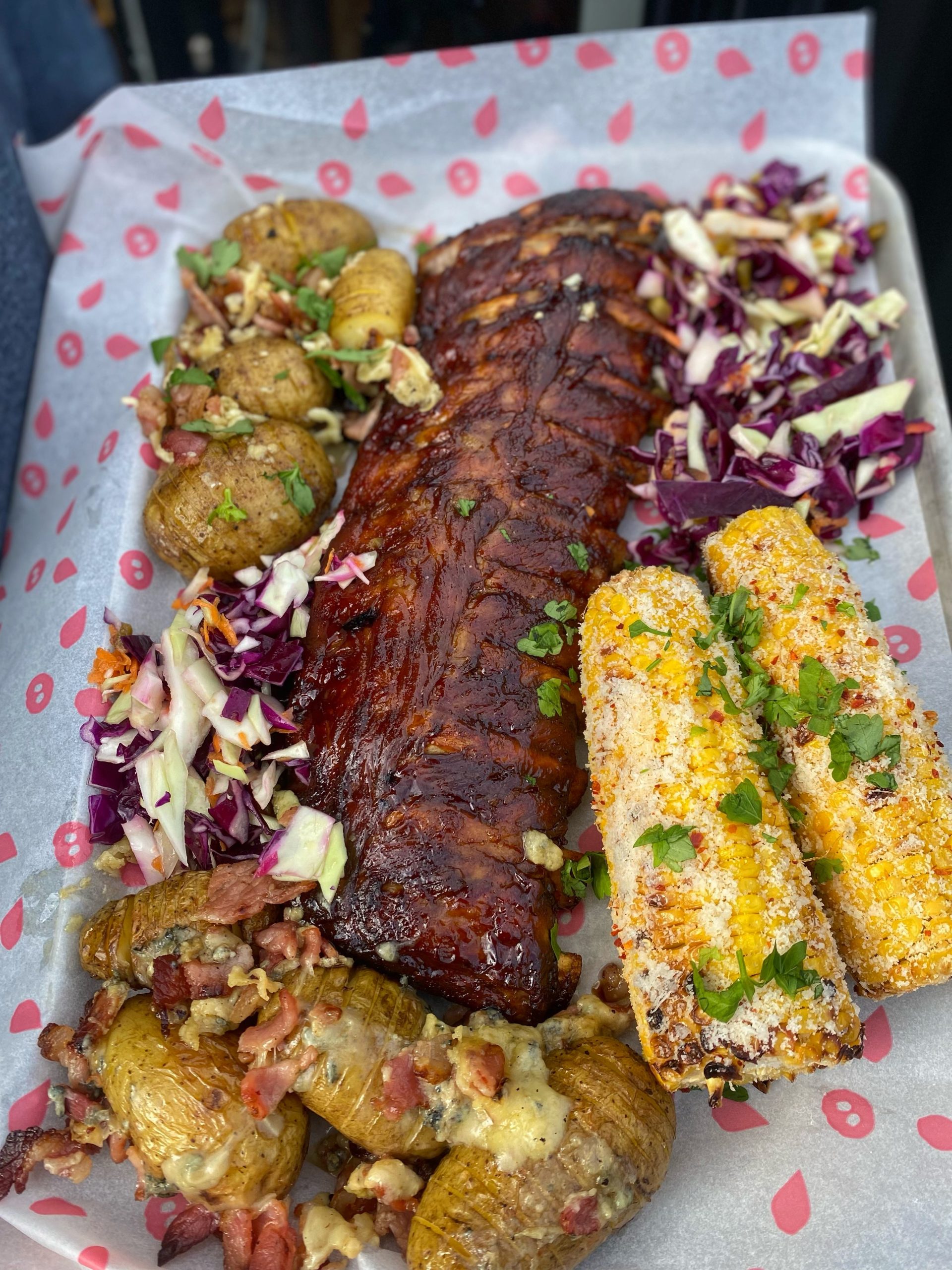 The best kind of food is sharing food and this BBQ Pork ribs platter is exactly that! We love finding, and thinking up, new BBQ pork ribs recipes to use with our Thick Cut British BBQ Ribs. Rubbed with a spicy dry rub, slow cooked for hours and marinated in a smokey black treacle and apple BBQ sauce, they are the perfect ribs to use in any BBQ pork ribs recipe. Our BBQ ribs take only 35 minutes to cook and require no effort on your side, but seriously impressive results. So you can prep these side dishes for ribs whilst our British pork ribs are cooking away! If you want side dish ideas for ribs or meal ideas for ribs, try this platter Max and Cheska cooked up for the team. They served the ribs up with Mexican street style corn, cheesy garlic confit bacon hasselback potatoes and a lime and honey slaw. Try re-creating the platter for the ultimate weekend family meal!

For the Ribs:
– The Jolly Hog BBQ Thick Cut British Pork Ribs (you could also serve up this platter with our British BBQ Pulled Pork instead)

For the bacon hasselback potatoes:
– Potatoes
– Cheese (we mixed up cheddar and stilton, making two different types of hasselback)
– Garlic cloves
– The Jolly Hog British Bacon – our Double Smoked Streaky Bacon works great for this recipe, or our Black Treacle Bacon for a sweeter twist.

– To start this bbq pork ribs recipe, start on the hasselback potatoes. Make them by putting a spoon under each potato and then slicing it multiple times, almost to the bottom.
– Stuff your potatoes with whole cloves of garlic and drizzle in olive oil. Season with a sprinkle of salt and pepper. Cook them in the oven on a high heat until the garlic has become confit garlic and softened, the potatoes are cooked, and beginning to go crispy on the outside.
– Put our British BBQ Ribs in to cook according to pack instructions.
– When your potatoes are almost done, fry up some of our British bacon, chopped up. Remove your potatoes and stuff the cheese of your choices between each potato slice, and drizzle with honey or maple syrup. Next sprinkle on the crispy bacon. Return to the oven until the cheese has melted and is bubbling away.
– For the Mexican street corn, cook the corn on the cob under the grill (or on the BBQ) until it is fully cooked and beginning to go golden. Remove from the oven, cover in butter and a splash of lime juice then cover a plate with parmesan. Roll each corn on the cob in the parmesan plate until its covered, and then sprinkle them with chipotle chillis (add more chilli the spicier you want them to be), plus chopped parsley and serve with more fresh limes.
– In the meantime, as your food is cooking, create your slaw by shredding cabbage thinly then combining honey, olive oil and lime juice and stirring through it. Add more of each ingredient depending on how sweet or zesty you like your slaw then serve up all the elements in the BBQ pork ribs recipe with the ribs taking centre stage! 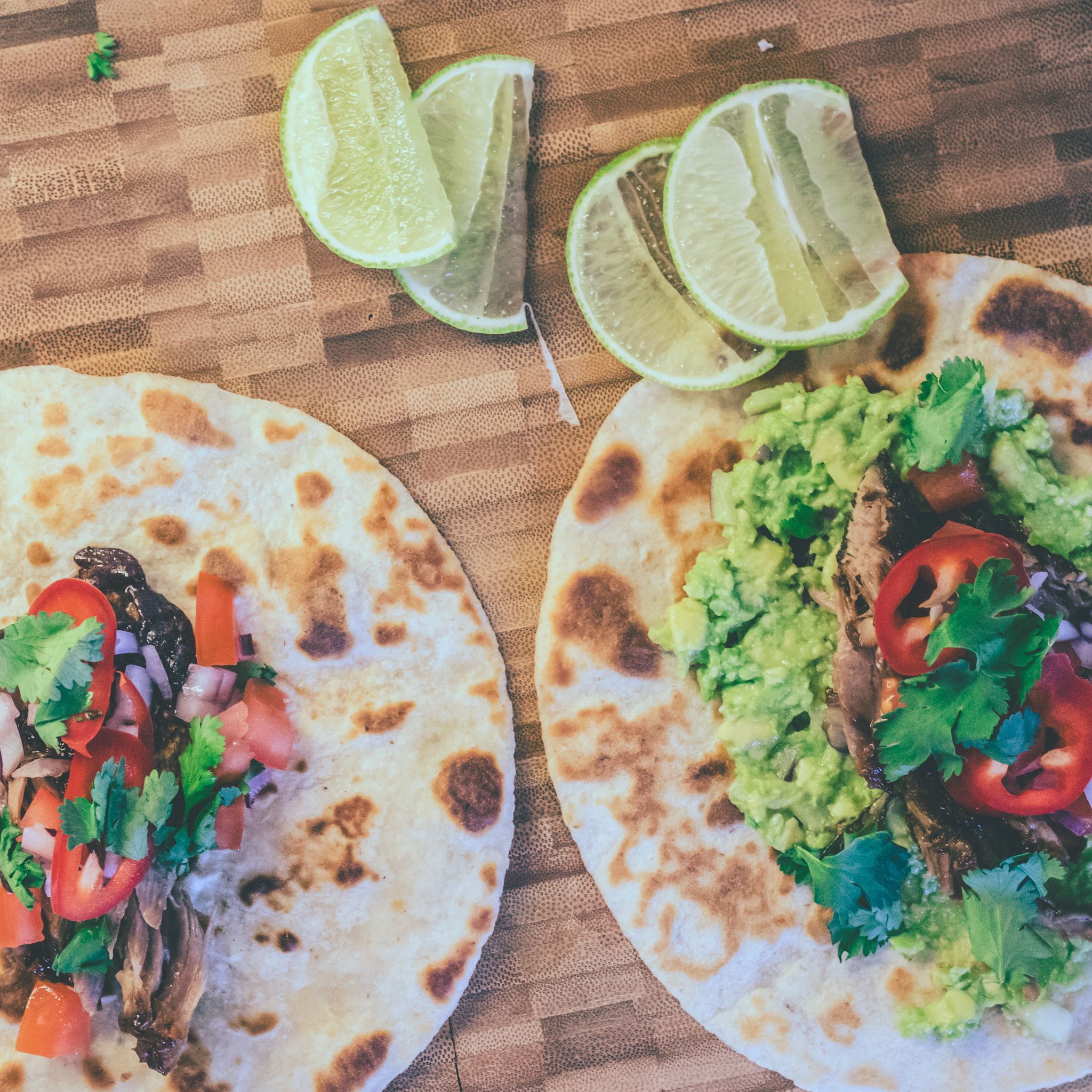 Now here’s a real simple recipe with an anything-but-ordinary taste. Shake up your usual taco evening with some of our Read more 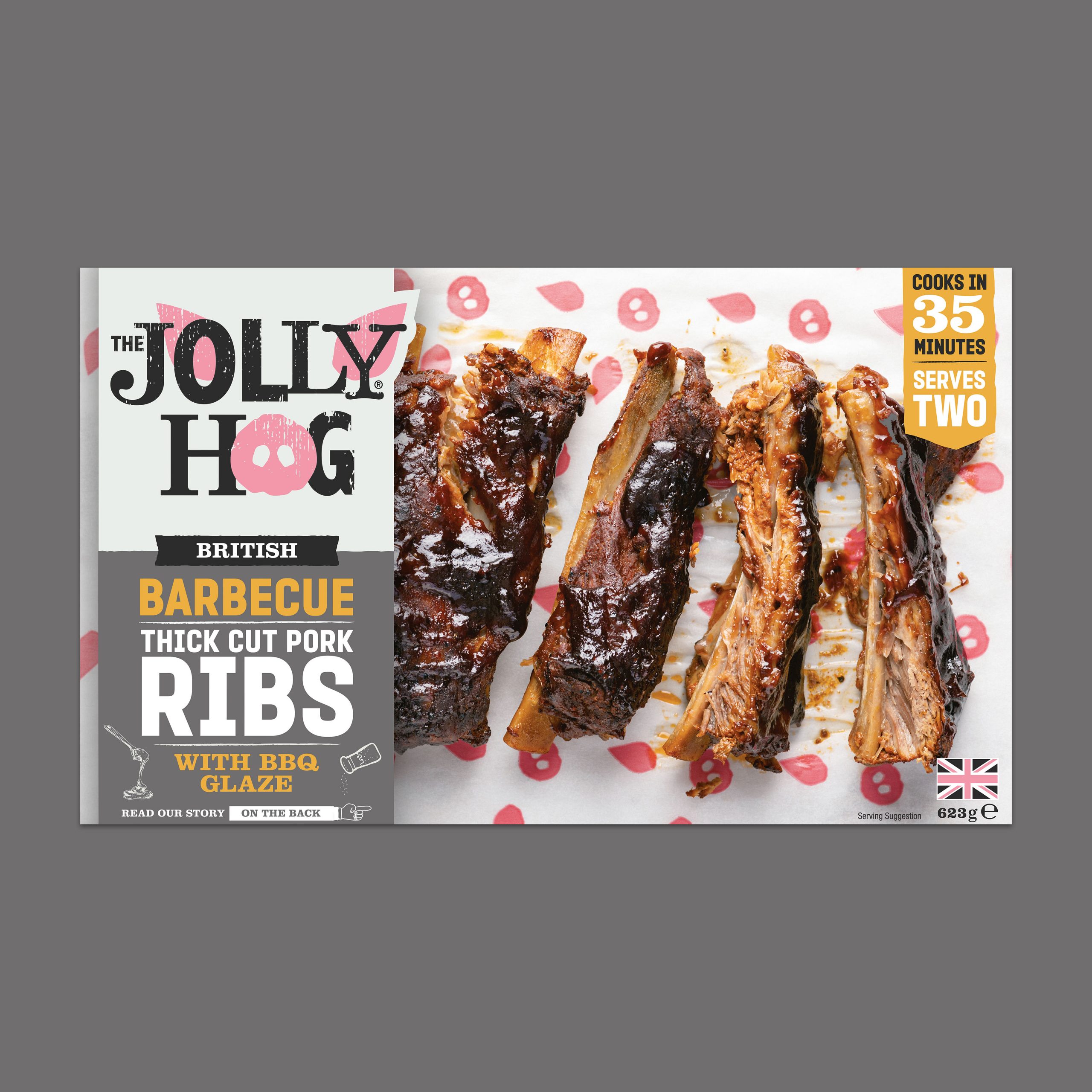 We decided to branch outside of our sausage and bacon and give BBQ the Jolly touch. Answering all BBQ enthusiasts Read more 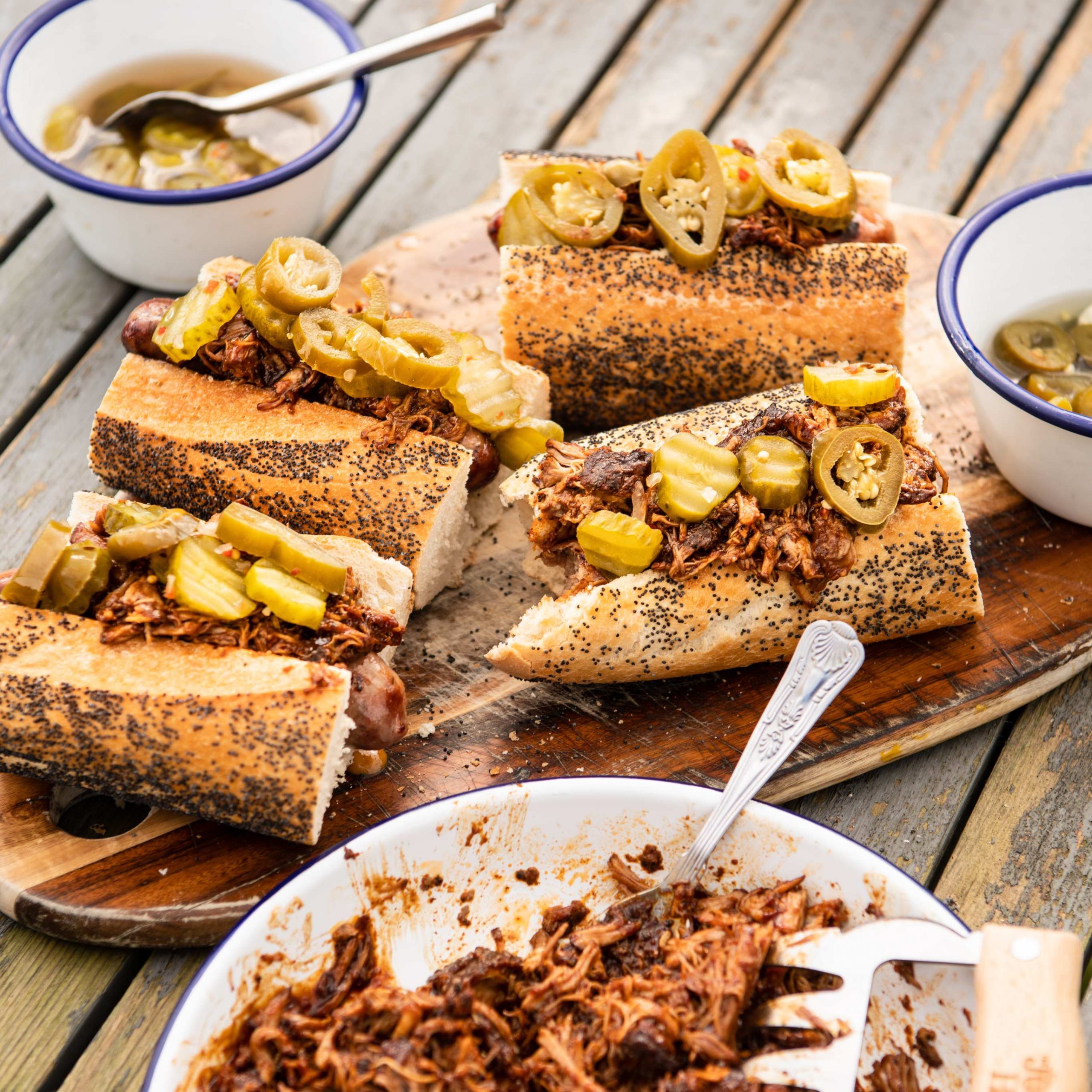 We asked Max to come up with his ULTIMATE hot dog! Max went for these smokey, sweet & a tiny Read more 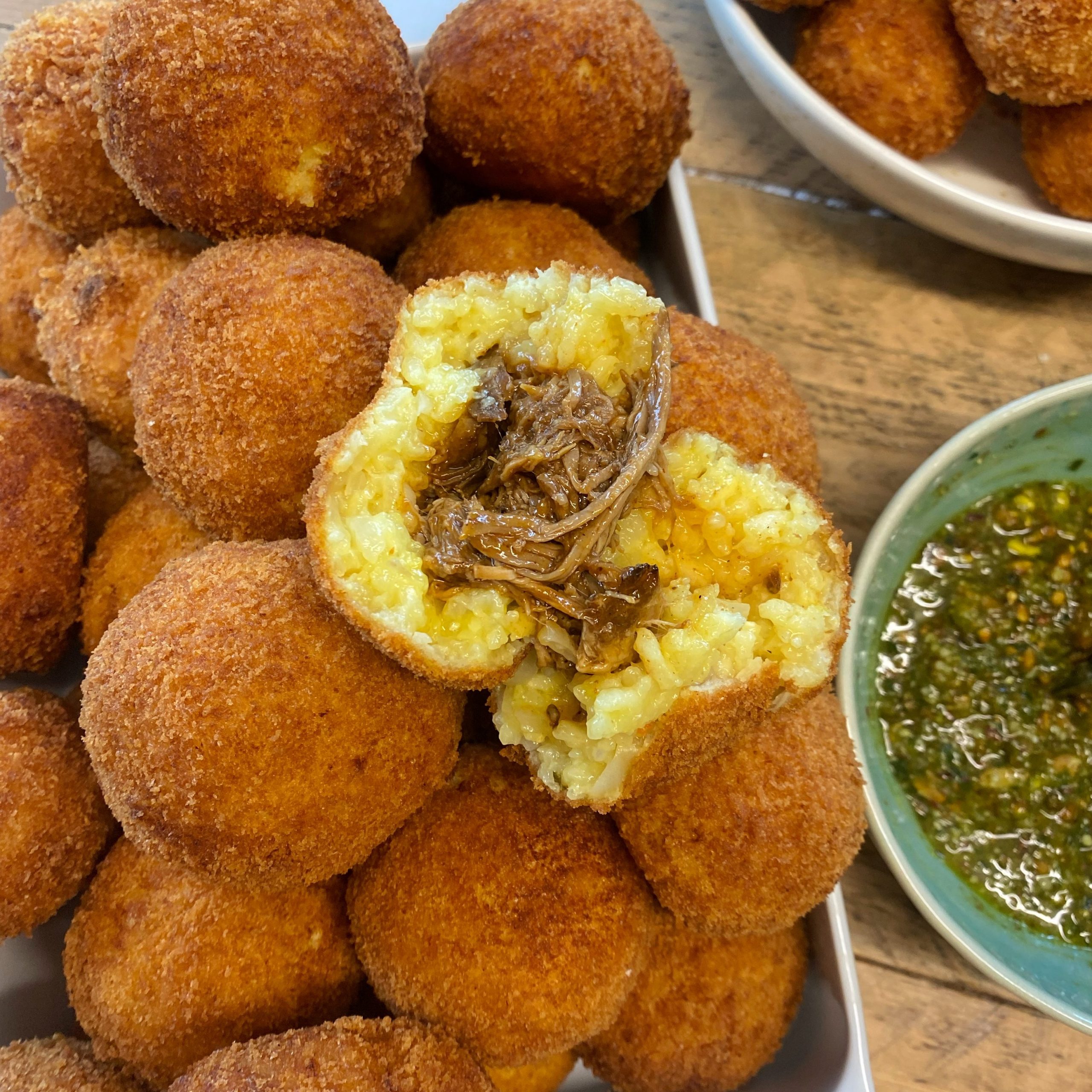 Ben, one of our account managers, made these absolutley delicious pulled pork arancini balls for a team lunch recently and Read more

We use cookies on our website to give you the most relevant experience by remembering your preferences and repeat visits. By clicking “Accept All”, you consent to the use of ALL the cookies. However, you may visit "Cookie Settings" to provide a controlled consent.
Cookie SettingsAccept All
Manage consent

This website uses cookies to improve your experience while you navigate through the website. Out of these, the cookies that are categorized as necessary are stored on your browser as they are essential for the working of basic functionalities of the website. We also use third-party cookies that help us analyze and understand how you use this website. These cookies will be stored in your browser only with your consent. You also have the option to opt-out of these cookies. But opting out of some of these cookies may affect your browsing experience.
Necessary Always Enabled
Necessary cookies are absolutely essential for the website to function properly. These cookies ensure basic functionalities and security features of the website, anonymously.
Functional
Functional cookies help to perform certain functionalities like sharing the content of the website on social media platforms, collect feedbacks, and other third-party features.
Performance
Performance cookies are used to understand and analyze the key performance indexes of the website which helps in delivering a better user experience for the visitors.
Analytics
Analytical cookies are used to understand how visitors interact with the website. These cookies help provide information on metrics the number of visitors, bounce rate, traffic source, etc.
Advertisement
Advertisement cookies are used to provide visitors with relevant ads and marketing campaigns. These cookies track visitors across websites and collect information to provide customized ads.
Others
Other uncategorized cookies are those that are being analyzed and have not been classified into a category as yet.
SAVE & ACCEPT